This is the output from the tracking via Marine Traffic as per the post a few weeks ago. It might look like it meanders a bit, but we were sailing to look at the large ships which were anchored or moored in the area. On the real site it shows the speed at the time, and at one point we were doing 5.7kts in zero tide.

The main purpose of the trip to Plymouth to assist our friends to learn to rig, launch and sail their new, to them, Cape Cutter 19 called Aurora. They made a small video:- 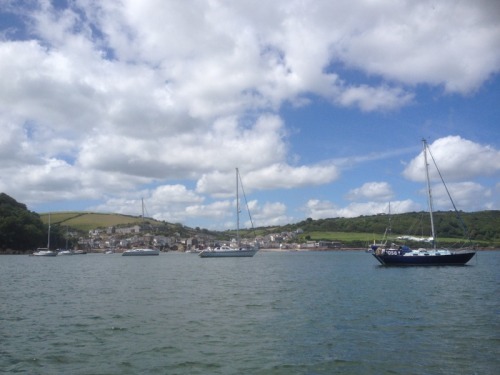 After a night being tossed around the marina in a gale F8 with accompanying rain, to wake up to calmer winds and a clearing sky was a relief. The Erbs were out for an early sail, before hauling Aurora out for the trip home. We had plans for lunch.

With nervous crew it was decided to stay reefed, but it was an easy fetch out past Drake Island and to the anchored frigate and RFA tucked inside the breakwater. Then we braved the big swell and made for Cawsand, where other boats were anchored for lunch. Spoiling the peace and quiet were the people racing around on jet skis from some huge 40m super yacht called ‘Imperial Princess’. 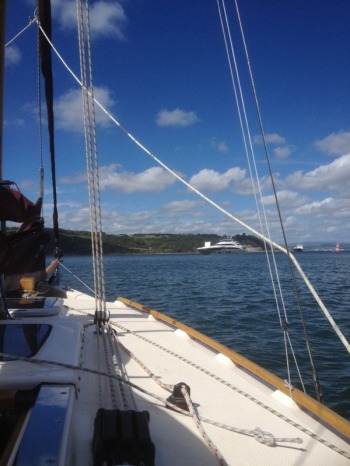 After a couple of hours it time to head back. We took a similar track to avoid the swell, and once behind the breakwater we flew the yankee too to ensure we made very good time. The evening was spent cooking pizza on the Cobb oven, sitting in the sun and listening to football on the radio. 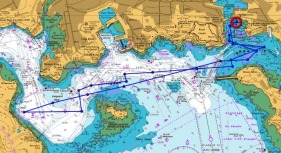 After a surprisingly pleasant sunny morning, albeit very windy, we prepared to leave Queen Anne’s Battery just as the first drops of rain arrived. Aurora was first to slip, and it wasn’t long before we were both beating westward under staysail and reefed main.

The rain continued, and increased, as we sailed through the lee of Drake’s Island. As we reached the far side other yachts were making for an anchorage and the tide had turned making that part of the Sound very lumpy. We didn’t want to get sucked up river on the tide, so we turned for home.

We arrived back just in time for a downpour, and it stayed all night. The winds increased to a Gale Force 8, making for a very bumpy night in the marina for everyone.

From one end of the country to the other, to some extent. Just a few weeks ago we were sailing in Largs and the Firth of Clyde – today we’ve travelled south, and I’m in Queen Anne’s Battery marina in Plymouth for four days. It’s been blowing a gale, but the sun is shining, and the skipper and his wife are tucking into rump steaks cooked on the Cobb oven.

This was taken just after sunset on Wednesday 6th June, 2012, looking west from the anchorage in Loch Ranza on the Isle of Arran.

Zephyr
Create a free website or blog at WordPress.com.